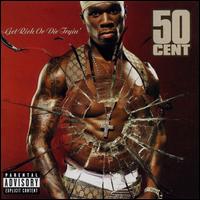 Album: Get Rich Or Die Tryin’

It €™s funny how 50 Cent has risen from near-obscurity to the position of selling an absolutely astonishing 2 million or so units in the first three weeks of the release of “Get Rich Or Die Tryin'”. Of course, we all know the story of 50 Cent by now, and we all know how much he has sold. So it’s time to figure out whether “Get Rich or Die Tryin'” is actually worth the huge figures it’s pushing, or is it just another example of how mediocre hip-hop albums blowing up because of its hype or its suitabillity to the mainstream.

One of the generally accepted theories how to sell massive numbers is to have a number of big singles to help push the album. Have no doubt about it, “Get Rich or Die Tryin'” has this. We’ve all heard ‘In Da Club’, apparently the first track 50 recorded with Dr. Dre when he joined up with Aftermath and Shady Records. The veteran producer’s driving beat is perfect club-material but when 50 comes out swinging he’s basically spitting lame, cliched thug rhymes with a truly mumbled, boring flow. Is this the charisma people say he has? I’m not impressed.

The same goes for ‘Wanksta’. A pretty hot beat with an infectious rotating key sample drives the track… but 50 €™s at it again with rhymes about the abundance of fake gangsta rappers in the industry, delivered with a nursery-school rhyme scheme and more mumbling.

If you bought €œGet Rich or Die Tryin €™ € expecting to hear exactly this, then you’ll be quite pleased. But for me it’s simply cliched and stuff I’ve heard so many times before. ‘P.I.M.P’ simply goes for all out misogny, whereas Dre €™s lacklustre beat on ‘Heat’ only enhances the huge shortcomings of 50 lyrically. He basically repeats his standard rhetoric of thug rhymes mixed with bragging:

“Keep thinkin I’m candy till ya fuckin skull get popped / And ya brain jump out the top like Jack-in-da-box”.

You’ll hear a lot of this kind of thing throughout this joint, and coupling this lack of lyrical variety with the fact that 50 is a simplistic lyricist at BEST, we are left with a €˜vibe €™ type rapper who depends upon his flow and charisma to carry tracks.

When he doesn’t mumble, he can pull it off as he definitely has a certain amount of charisma, but most of the time his flow on songs like ‘High All The Time’ and ‘Poor Lil Rich’ sinks the album.

But any LP that is backed by Dr. Dre and Eminem can’t be an absolute shocker, and that applies to “Get Rich or Die Tryin'”. The production virtually saves this LP, as we’ve established on the two singles: 50 is generally lyrically inept but luckily Dre and Eminem are behind the boards. I’d be willing to bet ‘If I Can’t’ would be little more than average if it wasn’t for Dre’s pulsating horns and keys. 50 spits arrogance LL Cool J would be proud of on this cut:

“They aint nothin they could do to stop my shine /
This is +God’s Plan+ homey, this aint mine”.

The last line particularly rankles with this reviewer, because, unlike LL’s 10 album-deep repetoire, based on much of the evidence of this LP 50 Cent doesn’t deserve his shine. It €™s also no surprise that Eminem €™s two guest spots only embarrassingly showcase the huge class difference between the two emcees, but this gap doesn €™t hurt the excellent ‘Patiently Waiting’. A dark, menacing Eminem beat reeks with eerie atmosphere which sets up a tight collaboration between 50 and Slim Shady.

And ‘Many Men (Wish Death)’ has a nice Oriental-sounding beat from Eminem, and 50 does his best impression of the introspective, poetic thug genre… hmm where have I heard that before? Oh yeah, he €™s basically doing a Ja-Rule and biting Tupac Shakur. If you’re anything like me the multiple references to getting shot and surviving a la Pac will annoy the hell out of you.

“Get Rich or Die Tryin'”, for the most part, is symbolic of the quality of modern mainstream hip-hop. With little depth or variety, only a couple of tracks on here are ones I can see myself bumping for longer than the next week. D-12 producer Kon Artis laces an excellent beat for the hilarious ‘Back Down’, which finds 50 finding his ‘How to Rob an Industry Nigga’ form, and ripping his long-time foe Ja Rule a new asshole: “I’m back in the game shorty, to rule and conquer/ you sing for hoes and sound like the Cookie Monster.”

’21 Questions’ is probably going to be one of the most underrated cuts on the album €“ over a funky, relaxed guitar lick 50 asks if he lost his fame and riches would a girl still love him. While sometimes crude, as he can drop horrible lines like “I love you like a fat kid love cake”, it’s quite an enjoyable song, enhanced by Nate Dogg on the hook. These two tracks demonstrate that 50 Cent does have some traces of talent. But unfortunately we don’t see it for the majority of this LP.

To be frank, “Get Rich Or Die Tryin'” does not deserve to have sold as well as it has. Fans will argue he deserves it and yes, 50 Cent has been through a lot, but despite his history it is inescapable that this is generic thug fare you have heard done a million times before. And it’s been done better. Which makes it in my book undeserved. Pass on this if you haven’t heard it already.