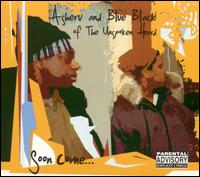 Every once and a while, along comes a crew that really makes you go, “Damn, them cats are coming correct!”. Well, this is one of those albums that should provide that type of reaction. Brooklyn-based duo Asheru and Blue Black (from the Unspoken Heard) release their freshman album, “Soon Come…” on Seven Heads Entertainment. For those that aren’t sure who these cats are, just think of J-Live. This album is positive and is comparable to the mixture of Hi-Tek meets The Roots meets Slum village. Scarcely released, but highly acclaimed on the underground circuit , it features production from the duo themselves, with guest producers like J.Rawls (of the Lone Catalysts), Obsession of the Aboriginals and DJ Bolex. “Soon Come…” is a welcome positive at a time when Hiphop seems to be more negative than ever. Track by track, things run like this…

Meals To Dinner Time (Prelude)
Even though J.Rawls produced a couple of tracks on this album, this is not one of them, despite its similarity to his style. This is an instrumental track with, both Asheru & Blue Black talking over the beat in a mock discussion about, “Who’s better… Dr. Dre or Erick Sermon?”. A piano-laced track.

Truly Unique
This joint is on a couple of mix tapes that I’ve heard but in remixed form. This album version is still a hot, club, danceable track. Faced paced and should definitely be a hit and a UK club-pleaser with vibes and a melodic chorus striking in the background.

Live At Home
A jazzy track with piano in the background as well as a drummer and bass player with Asheru & Blue Black scatting over it. Track reminds me of a Roots/Digable Planets joint.

Theme Music
While listening to this song, I feel like I’m on a gondola in Venice listening to some local rap minus the Italian language. A mandolin or piaclou playing in the background over a mellow beat.

Soul
James Brown sampled voice “Soul” which is going along side the organic, piano assisted beat. After sparkin’ one of drinking a cold one (or 2 or 3), and hearing the repetitive “soul” sample of JB in the background, you might be a little get a little annoyed. But overall a track that grows on you.

This Is Me
Jazzy track with a George Benson-like guitar happening in the background. A song for the veteran B-Boy.

Dear You
Produced by J.Rawls (of the Lone Catalysts). A mellow track masterfully produced by the upcoming cat from Pensylvannia with an ‘I Used To Love H.E.R.’ or ‘Stan’ type of flow from Asheru & Blue Black. They arrange their verses in the format of a letter dictated to a girl about their love for Hip-Hop and how the art and music comes before her and ones else but how they’d always be there for her, blah, blah, blah… intelligent word play with the lyrics.

Smiley (The Woh, Woh Song)
An Alchemist style track, but produced by Obsession of the Aboriginals. Deep lyrics about the ills of society, but nice flows by the duo.

Soon Come
Title track of the album, which reminds me of A Tribe Called Quest. A nice track – good for a cold, winter day.

Think About (f/ J.Sands of Lone Catalysts)
Another J.Rawls produced track that’s piano-laced over a smooth beat with a touch of saxophone, lyrically flexed with Asheru & J. Sands going back and forth about Beats, Rhymes and Life. Peace.

Elevator Music
The final track of the album. A tight track. A straight-up ATCQ-styled track with a background chorus sounding like a 50’s quartet out of Mayberry (Andy Griffith-style) over a funky beat that had me nodding.

This album, is a pretty good pick and is recommended to all of real hip-hop heads out there.