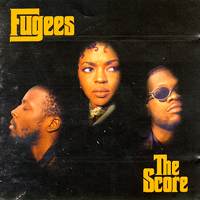 Fugees’ “The Score”. How do I even begin? Absolutely positively, dope from beginning to end. Lauryn “L. Boogie” Hill, Wyclef Jean, and Prakazrel “Pras” before this album had been teetering on that transition from underground to mainstream. ‘The Vocab’ had turned some heads. Critics had bashed the two gentlemen and praised emcee songstress. Labels had set their sights on Lauryn and tried to break the group apart by offering her solo deals. The group stuck together based on a friendship they had formed growing up as well as a shared kinship for their fellow Haitian countryman. Their response to their detractors came in the form of “The Score”, as they had one to settle. Settle it they did.

This album was a fresh display of emcee teamwork that was an instant hit and made The Fugees a household name. The production work was different from what was ruling the airwaves at that time. Original beat work and use of non-traditional sounds as well as a selection of samples from classic tunes formed a musically delightful seventy-three minutes and 30 seconds. “The Score” spoke in positive tone with several tracks speaking on social and political issues.

‘How Many Mics’ starts the album off with ‘Clef dropping a brief hook that leads into the gorgeous Lauryn Hill dropping a verse that sets the tone for what you are gonna get throughout the rest of the album, amazing shit. I must digress, for those of you who think of Lauryn as only a singer, you are WRONG. Lauryn can sing, and she sings well but you can’t spit like this and not be an EMCEE. So pay attention and I won’t have to find you dumb asses, Lauryn Hill is one of the dopest female emcees ever, if not THE dopest. Someone call her and remind her of that, I think she’s forgotten. Come to Timid ma, I’ll help you remember you.

Anyway, back to the subject at hand.

A haunting Enya sample panning left to right starts off one of the biggest hits that came off of “The Score”, ‘Ready Or Not’. The trio does their Refugee thing and trade verses and vocals until you can head nod no more. A sample of the oldie ‘I Only Have Eyes For You’ provides the meat of the beat to ‘Zealots’. Wyclef sheds the light on the efforts that had been perpetrated against The Fugees to dismember the group in his verse, “You can try but you can’t divide the tribe, these cats can’t rap mister author I feel no vibe/ (what you read?) the magazine says the girl should have went solo, the guys should stop rapping vanish like a noodle/ took it to the heart but every actor plays his part, as long as someone was listening I knew it was a start”.

Government conspiracies and police abuse of power is the topic of the next track ‘The Beast’. Here Lauryn displays lyricism at it’s best on her two verses. This leads into one of the dopest album interludes ever recorded. Man this kung-fu Chinese restaurant skit is funny as hell.

‘Fu-Gee-La’ was another of the big hits that helped in the resulting success of The Fugees as a group. Lauryn provides the vocal hook covering another oldie “Ooh La La La”. A deep ominous almost Spanish guitar provided by Wyclef smoothes out ‘Family Business’. Two of the “family”, Forte and Omega guests on this track as the Fugees handle business.

The biggest most recognized hit off “The Score” and of that year was the cover of the Roberta Flack classic ‘Killing Me Softly’. Lauryn treated the audience to her silky smooth delivery over a basic drum loop. Wyclef shows up in the hook along with a bassline that only plays for the duration of the chorus. This song really took The Fugees places and along the way had Lauryn sharing the stage with Roberta Flack herself. The video for this song also showed the world how good a fine black woman could look in a big Angela Davis afro. L worked that fro like it was the seventies.

The title track chimes in at just past the halfway mark. ‘The Score’ is another smooth beat (this time provided by Diamond D) backed by a low guitar providing variation throughout the whole track. Sound bytes of verses of the Fugees songs that remark back to detractors make up part of the hook. Track ten is not a Jim Carrey tribute but a commentary about how people hide their true intentions. ‘The Mask’ uses a boingy type bassline and a panning sax sample that sounds like it comes from a jazz track from the twenties. Lauryn displays a nice punched in story telling verse. This track also has Pras taking a shot at the Notorious B.I.G., “yo did you shoot him naw kid I didn’t’ have the balls, that’s when I realized I bumping too much Biggie Smalls.”

You want a phat collab track? ‘Cowboys’ fills that need. Pacewon, Young Zee and the highly underrated Rah Digga join L, Clef and Pras. L. Boogie and Rah Digga provided the main fireworks with a tag team effort that is so well executed that it is sometimes hard to tell who is who.

Lauryn cleared the stage earlier to flex some vocal muscle to perform ‘Killing Me Softly’ and now it’s Wyclef’s turn. Clef remakes the great Bob Marley’s classic ‘No Woman No Cry’. With guitar in hand and a breakbeat Clef delivers a cover that works quite nice. Y’all leave Wyclef alone and let him do his thing yo. ‘Manifest’ rounds out regulation playing time with DJ Scribble on the cut. Again, Lauryn strings together an amazing verse that speaks from the heart of a woman scorned.

The next two tracks are remixes of ‘Fu-Gee-La’. The final half a track ‘Mista Mista’ has Wyclef on the acoustic guitar doing his Wyclef thing about a bum begging for money to support his drug habit. It’s an interesting track that actually speaks on a serious topic.

Now some still question the need for Pras in the Fugees at all. I don’t agree with them. Pras as just as an important part of the trio as the other two. Pras is the more grounding sound, the familiarity that will hold heads that may not be able to grasp Lauryn’s intricate rhymes and Wyclef’s non-traditional style.

“The Score” is a complete work that encompasses underground flavor and makes it accessible to the mainstream. The release of the Fugees sophomore effort pushed the group to superstar status and closed the mouths of the previous critics and detractors. I’m sure Wyclef grinned his ass off when he became one of the most sought-after producers in music and the people who berated him were swinging from his nuts. There is however one big irony that arose from all the acclaim which followed the release of “The Score” – the success of an album the served to display the unity of these Refugees actually became the reason that they broke up. Here it is nine years later and there is still no follow up album. For a period there was slight beef between the members of the group that once stood strong together. It’s a shame. Come on, get it together people.

One Reply to “REVIEW: The Fugees – The Score”