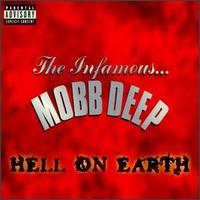 Let me take you back to the year 1996. The setting is Queensbridge, New York… the players – two of its children, a couple of rap artists by the names of Prodigy and Havoc, collectively known as Mobb Deep. What’s this? You know of Mobb Deep already? Ah… right. Well actually, there are in fact two Mobb Deeps. One made it big by doing tracks with 112 and Lil’ Mo amongst others : whilst the others did nothing but kick street tales. In case you haven’t realised by now… the two Mobb Deeps of which I speak are actually the same group with the exact same members. The reason for this so called ‘difference’ is that around 1999, something changed in QB’s finest to alter their approach to the game we all love. This ladies and gentleman is not only an album review… but also what will probably turn into my teary-eyed personal nostalgia. So folks get ready for “Hell On Earth”.

As a massive fan of the duo’s previous effort of attempting musical perfection – “The Infamous” LP – it is to my joy to hear Havoc announce on the very first line of the very first track of the album (‘Animal Instinct’):

“Yo, yo, y’know how we did on The Infamous album, right? Aight, we gonna do it again son”

To be honest, any artist in the world would have trouble replicating the attitude and expectation laid down by The Infamous, but even from the first, almost chilling, beat that blasts out from your system, you know the Mobb won’t let you down.

I’ve always thought there was something quite eerie about how Havoc produced this album (beats et al) and, coupled with Prodigy’s almost comatose flow, “Hell On Earth” seems almost as if it was made to accompany and be the soundtrack to the slipping away of consciousness from your soul. The whole feeling of the album is very morbid to the extent where it provides an aura that makes it the perfect sound to relax to. Perhaps this all stems from the Tupac diss ‘Drop A Gem On Em’, which was actually released on this album after the late Shakur’s death. Whether controversial or not, you cannot hide the fact that Havoc and particularly Prodigy provided an immense battle record.

With following Mobb Deep – and numbers of their neighbours from the ‘boro over the years, I have become accustomed to life within Queensbridge and feel almost as if I have visited the housing projects that remain a long-haul flight away. It’s through tracks like ‘G.O.D. Pt. III’ and the excellent ‘Hell on Earth: Front Lines’ that you really begin to become part of the whole Mobb Deep/QB experience. When it comes to tales of street life, no one does it better.

Noticeable guest spots on the album come from an on-point as usual Nas and Big Noyd on ‘Give it up Fast’, Method Man perfectly offsets a lyrical master class from Havoc on ‘Extortion’ and finally Raekwon completes the Wu invasion on ‘Nighttime Vultures’.

So what’s the catch? Well for one thing, tales of street life etc. in itself is great, especially if they can be delivered in the way Mobb Deep had seemingly mastered on this album and previously. However, the tales and whatnot can get a bit repetitive along with the beats. There are only so many times some people will be able to put up with hearing “rep the QBC” without cracking. Also, the fact that this album does not have one track at all that you can ‘get down’ to will not be to the taste of some.

A conclusion? Basically, if you know who the real Mobb Deep are and you’re familiar with the whole Queensbridge sound, then this is one album (along with Nas’ Illmatic and The Infamous) you will quite frankly die without. It is a tremendous insight into how I for one believe Hip-Hop should be portrayed; no party beats, hard cutting lyricism and sounding like it was made in the bedroom of Havoc’s QB housing project apartment (although I can assure you it wasn’t!). With replay value so it’ll still be spinning in your player by the time Prodigy remembers how to wake up and flow like he did on this album, you must cop this.