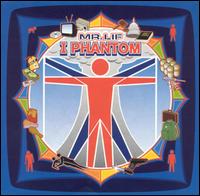 Coming straight out of the scene in Boston, MA, underground rapper Mr. Lif enters the scene with his 3rd effort titled “I Phantom”. Known mostly for dropping a number of 12″s starting out around ’97, doing various collaborations, dropping a few EP/LP’s (“Mr. Lif Enters The Colasus”, “Live From The Middle East” and “Emergency Rations”) and winning Outstanding Rap/Hip-Hop Artist at the 2000 Boston Music Awards, Mr. Lif, is showing that he is truly a force to be reckoned with his nasal flow. With a positive humbleness he states, “Honestly, I just hope that I continue to make music that people feel and I just hope that me looking into my heart to try to bring forth what I perceive is true, continues to provide hope and inspiration and positivity for folks. And at least spark some dialogue as I address issues that I feel are pertinent to human life universally. I hope that people continue to relate and just feel empowered because I’m just trying to raise awareness and cause conversation. To just provide some positive energy, to build and strive, to enjoy life, you know?” Now, down with the Def Jux label/crew, Mr. Lif takes full advantage of his underground connections.

The general synopsis of “I Phantom” is a little more complex than your typical rap album. This is more of a concept album. The bottom line is a young man, down on his luck, has a nightmare about making a fatal mistake. Although this is not a party album, nor does it contain “party tracks” it’s more of a realization of the state of the world today, through the eyes of a B-boy. The album is an exploration of the dynamics of everyday life and the pursuit of dreams in a rapidly decaying society. “I Phantom” is a story from beginning to end, told mainly from a third and first person perspectives.

It starts with the main character (who is unnamed) in the midst of a dream state in which he envisions everything form his own death to the summit of his prowess (‘Bad Card’, ‘A Glimpse Of The Struggle’, ‘Return Of The B-Boy’). His dream is rudely interrupted by his alarm, and sadly it’s back to the real world. The next series of tracks embody the struggles of the day-to-day living (getting jerked at your job, hoping to fit into the social circle, attempting to maintain a social life, etc.) and to say the least, the character in this story finds a great deal of trouble finding his niche (‘Live From The Plantation’, ‘New Mans Theme’, ‘Status’ and ‘Success’).

The last 6 tracks are dedicated to providing a vivid display of how the social ills of the American society fuels a decay which effects all of our lives to a great extent. This is achieved by providing a scope in which we see. The effects of these ills on everything from family structure (‘Success’ and ‘The Now’) to life as a whole on planet earth (‘Earthcrusher’ and ‘Post Mortem’).

The story is challenging to follow because the perspective changes often and the tracks fit together in intricate ways. Stand out tracks are ‘New Mans Theme’, ‘Handouts’, ‘Status’, ‘The Now’ – a throw-back Public Enemy / Bomb Squad-type track, and ‘Friends and Neighbors’. It’s definitely a complex album with complex ideologies as well and production, but never-the-less an album that deserves a good listening, or maybe two.