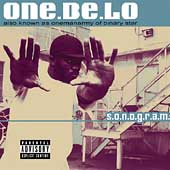 Methinks Nashid Sulaiman has been swallowing too many Chuck D pills. Remember ol’ Chucky used to love tossing acronyms around? Remember his J.A.C.K.A.S.S. theory? Or the way he tried to make something deeper out of the word PEACE? Remember how we all thought at the time that Chuck was way above us on some next shit? Remember when you actually discovered that it was less clever and unique, and more patronising and boastful? (“Look what I can make out of THESE letters?”) Well, take a deep breath cos the homie One.Be.Lo (from now on referred to simply as ‘One’ or ‘OBL’ because repetitive strain injury will set in if I’m continually forced to put in all these extra periods in the middle of his name) has picked up Chuck’s game plan and decided to flip it a little.

Not only has he titled his album “S.O.N.O.G.R.A.M.” (Sounds Of Nashid Originate Good Rhymes And Music… yawn), but he’s also made a cut with the entire trackname spelled BACKWARDS! Wow, lets just pretend that Dre, Eazy, Ren and Yella never made a follow up to “Straight Outta Compton” and mark this down as GROUNDBREAKING, shall we?

Phew… now that the early bile attack has passed, let’s deal with the facts. OBL is Nashid Sulaiman is OneManArmy is one-half of Binary Star (whose “Water World” / “Masters Of The Universe” release) got them a fairly decent below-radar following in 1999 and 2000. Now going for dolo after splitting from BS partner Senim Silla, One comes back into the game with a new name and promising a wiser more mature look at proceedings. “S.O.N.O.G.R.A.M.” is the result, and our f(r)iends over at Okayplayer love it – so that shows you what type of tippy tip, ol boy is on.

Lets addresses things one at a time, shall we?

First off – the beats are extremely inconsistent. At times this albums throws up moments that rival anything released in the last few years for quality, and yet at other points throughout, things descend. into. standard. boring. underground. hiphop. territory… where… beats… and rhymes… mesh…….. into…….. one…….. big……………….. sloppy……………….. yawnfest……………….. And what of One’s much-hyped lyrical abilities? Well, honestly he ain’t really bringing anything new to the table with a style and flow akin to a sub-par Black Thought with traces of Common Sense (before he got Badu’ed up.) His flow is on point, but there’s nothing unique that would make him stand out from the other 99 emcees in the ‘Lyricist Lounge Runner Up’ pool that he must have been placed in after Punch and Words grabbed the MTV spots a few years ago.

The backwards track ‘Kcab No Eht Enecs’ is the first encounter with quality after a disappointing opening track. Here, One puts on his Mos Def hat, sounding remarkably like the backpacker fave (which ain’t always a bad thing) while spitting over a track awash with jangly jazz keys that give off the standard dread-poet-burning-incense-and-drinking-organic-coffee-vibe. Don’t think I didn’t notice him biting a shitty throwaway line I used on alt.rap about 6 years ago though… (“even with a Rick James sample you couldn’t touch this”) my cyberlawyers will be in touch. ‘Propaganda’ goes all Woodstock, with singalong hippy guitars forming an addictive base for a cut where One talks One World Order ish about programming your brain instead of your television, and sends jabs at those without a dick-turtleneck (“Everywhere you go its the same old news, and everything I mention get controlled by Jews”)

Its not hard to spot who One has been influenced by on his way up through the industry – and sometimes its not always a good thing. ‘Axis’ shows influences from old time Common and Heiro with its bouncy piano base, while ‘Sleepwalking’ sounds like a remake of Lauryn’s ‘Everything is Everything’ and Diamond D’s steelo is reflected in ‘Evil Of Self’. These are some of the good things on offer though – there is a negative flip side, with Hippy Common’s guava-eating “Electric Circus” personality stamped all over the horribly experimental ‘Questions’ illustrating this perfectly.

The middle part of the album suffers from uninspiring production and tiresome microphone outings, (‘True Love’, ‘Can’t Get Enough’ and ‘Used To Be Fly’ please stand up), with the horrible ‘Deceptacons’ being the worst of a fairly average bunch. Whoever had the bright idea to loop up some shitty strings, and then pretend to be Public Enemy over the top, really needs to have their head examined. Doesn’t One realise that Flav has enough help from Sly Stallone’s ex in looking a fool? We already have enough on our plate with one of our original Hiphop heroes being presented to Joe Public as a cracked out fool (yes he IS a cracked out fool… but before ‘Surreal’ he was OUR cracked out fool). We don’t NEED another Flav, and we certainly don’t need someone doing bad Flav impressions over boring beats. That goes for not-even-close Chuck D impressions too, my man.

Luckily OBL must has sensed my cyber ‘get-back-in-line’ slap coming the minute he laid those ‘vocals’, because it looks like he worked his ass off to please me with the last portion of the album. He closes strongly, with ‘ET’ pulling things out of the rut, before the superb ‘Rocketship’ and the best track on the album ‘Unparallelled’ round things off. ‘Unparalleled’ features a bubbly brass-heavy backing track, with One and guest (and producer) Magestik Legend trading vocals in classic Ghost/Rae “Cuban Linx” style.

Verdict? Not as good as other people are cracking it up to be, but certainly not a blot on his copybook. The good portions on what is, to be honest, a slightly bloated longplayer, definitey bode well for OBL’s prospects in the game… but more attention must be focused on ensuring that its the majority of the tracks on an album reach this quality level, and not just a scattering of cuts.