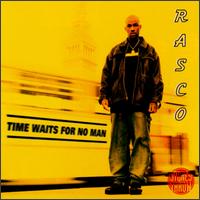 Album: Time Waits For No Man

As one half of the Cali Agents (with buddy Planet Asia) veteran Bay Area rapper Rasco has made quite an impact on the underground scene since this much over-looked 1997 LP. The album’s credits reads like a who’s who of West Coast underground, with production from Evidence and Peanut Butter Wolf and guest verses from Defari, Dilated Peoples and a then largely unknown Encore but it is, without a doubt, Rasco’s joint as he rocks track after track with unrelenting passion and hunger.

The album opens with the first of three ill Paul Nice tracks ‘Time Waits For No Man’ featuring Encore, who admirably trades verses with Rasco, before moving onto ‘Suckas Don’t Respect It’ which again is a fat beat which suits Rasco’s style perfectly. The following two songs feature production from Evidence and are also tight, with Ev appearing on the mic (along with Defari and Iriscience) on the second, ‘Major League.’ Next up is the modern classic ‘Me and My Crew,’ produced by the tragically underrated Kut Masta Kurt, which bangs harder than almost anything else he’s ever produced. And that’s saying something. Following the average ‘What Its All About’, comes the second Paul Nice track which is equally as good as the title track, if not better. What follows is a nice scratch interlude (featuring DJ Vin Roc) and another heater, ‘Unassisted,’ featuring cuts by D Styles of the Scratch Piklz – the beat is simple but Rasco spits fire before D Styles cuts the track to scraps.

From here on, the album goes slightly down hill with four, dope, but not outstanding Peanut Butter Wolf produced tracks before ending on another high, the final Paul Nice track ‘Heat Seaking.’ Overall, its a solid album which apart from a slight loss of momentum towards the end, which is definately worth picking up if your a fan of the whole Stones Throw/ABB vibe or even if you just need reminding of what the Bay Area is really capable of producing.