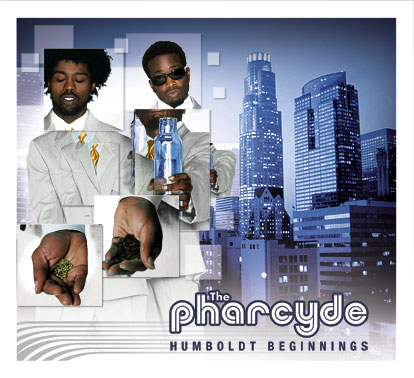 The Pharcyde are one of those crews who always had a better rep than their musical output indicated they should have. Of course their debut “Bizarre Ride To The Pharcyde” set the bar incredibly high for them, with its ‘instant-classic’ status amongst heads proving impossible to top (Note: Its good – but not THAT good.) The follow up “Labincalifornia” had some impressive high points, but some decidely average filler cuts – couple that with the fact that it arrived around 3 years too late to capitalise on ANY buzz from their debut, and its not hard to see why it didn’t make much of a real impact. From there, its a tale of a patchy 12’s, and another album “Plain Rap”, that was released as the group part-imploded, with FatLip’s on/off relationship with the band becoming permanently ‘off’. Largely ignored, the failure of “Plain Rap” caused Slim Kid Tre to also look to pastures new, resulting in the remaining duo of Imani and Booty Brown having to regroup.

Regrouping complete, the tandem release “Humboldt Beginnings”, an album praising a certain weed-heavy area of Cali. In case you didn’t realise this, they’ve heavily sprinkle liberal weed graphics all over the cd and packaging, and themed several songs and skits around their love of Mary Jane. About now you may be thinking “Hmmm didn’t Cypress Hill base their whole career around this? Isn’t this about 10 years out of date?” I know I was…

On first listen, it’d be a little harsh to say that this album could definitely continue the weed theme by being useful as a ‘rolling’ surface, but honestly – its nothing to write home about. The beats and rhymes scream ‘uninspiring Cali-indie rap by numbers’, while Booty and Imani do little to change the view that the two missing members are the ‘real’ Pharcyde and have split leaving the hype men to carry the show. ‘Uh Huh’ and ‘Storm’ get things off to fairly dull start, with the latter in particular featuring a lukewarm SpaceboyboogieX impression of Dre production.

From there things spark a little with ‘Knew U’, which draws comparisons with the sounds and mood of ‘Runnin’ from the sophomore album; while ‘Right B4’, a much more mellowed-out affair; and the hidden track ‘Fastlife’ both impress. These tracks aside though, the mix of weak emceeing, stuttering electonic production, and a general feeling of ‘seen-it-all-before’ means that the project is a largely forgettable one. I know that I won’t be checking for ‘Bongloads II’ again, anyway. One exception however, for all the wrong reasons, is the unimaginative Imagine-sampling ‘Illusion’ (did you see what I did there?) – here the duo loop up ‘Just An Illusion’, perhaps to illustrate to others the best way NOT to use this break. Style-wise, its a total departure from every other track on the album – it would already sit uncomfortably alongside everything else if it was decent, but the fact that its a horrid reworking of the original just makes things worse. “Fake like cutting a woman in half”? Step. Ya. Rap. Game. Up. Please.

Perhaps before jumping on the ‘smoking-weed-is-so-dope-we-want-to-base-an-entire-album-around-it’ bandwagon, Booty and Imani should have checked out the careers of Total Devastation and Potluck. Or maybe they should have based an album around taking speed – at least then “Humboldt Beginnings” might have carried some tracks with a little more life. As it stands, its like being trapped in a room with Jay Dee (ex Slum Village) for most of the time – boring to the extreme.

Back to the lab(incalifornia) for this duo… for those anticipating a new Pharcyde album – keep waiting, cos this is not even close to being it…