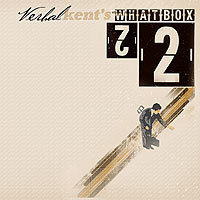 It takes a lot to impress me. Verbal Kent’s What Box album doesn’t do it. I’m sorry. I wish it did. But from his average indie MC voice to his trying-too-hard-to-be-funny pointless battle punchlines and sounds-impressive-because-it-uses-big-words but meaningless lines, Kent consistently disappoints. If you enjoy Eminem clones who can’t match Slim Shady’s flow or use of slant rhymes, but do their damnedest trying, you will love this record. There seems to be a large market for that kind of music, so what do I know? About the only redeeming factors for me are the sometimes-inventive beats and the fact that better MCs who make guest appearances probably got checks they can use to make their own records.

I’m probably being too hard on the guy. Some of his lines are clever. But overall, it just feels like smartassing for the sake of smartassing, and the ass in question probably isn’t as smart as he wants you to think he is. His whole reason for rapping is to tell you how great he is, and how much you (whoever the “you” in question is) sucks. His battle rhymes directed at nobody in particular are best exemplified on ‘Tomatoes and Glochs (sic)’

That’s pretty much representative of the entire album. Over your standard college radio hip-hop drum loops, piano or symphonic samples, and record scratches, new ways of saying the same old battle rhymes and boasts. Some of the new ways are amusing (“this is different like dogs with opposable thumbs” from ‘The First’, “this is the remix, there is no original” from ‘The Remix’) but most are tired cliches (“I’m dope enough to be considered weed” from ‘Spit to Hill 1’).

After that low, things get slightly better. ‘Power’ is a derivative of Nas’ ‘If I Ruled the World’, running a litany of idealist what-if’s against a sample that sounds like it could be bumper music from Coast to Coast AM hosted by George Noury or Art Bell. At first, it sounds like a sincere if somewhat simplistic assessment of social problems:

“Imagine living in a world without stereotypes
a world where if you couldn’t teach, you would never use mics
picture children learning math before they learned about ice
and nightlife without gunfights or ipes(?) with pipes
what if rights weren’t made right by just males and whites
we’d reach new heights/ a lot less would rock pinstripes”

In the end though, we’re left wondering if this isn’t just another way for VK to tell us how much smarter he thinks he is than us. As just another MC who points out the difficult questions and imagines utopias without any realistic answers, Kent’s lyrics will still have the power to make you think for a minute.

Just when you begin to think that the whole disc may be a waste of material, you hit the track where other MCs run in like Mighty Mouse to save the day. Qwazaar and Willis Drummond II break the album open with their scientifically brutal verses over the dramatic thug concerto beats on ‘Big Buildings’. ‘The City’ (Featuring Willis Drummond II And Iomos Marad) is an ode to the city of Chicago which keeps Kent on the hook, and Drummond and Marad’s verses paint a realistic picture of the gritty, beautiful environment which they claim. Letting Kent stay on the hook with a short verse or two while more able MCs drop fire is the strategy through most of the second half of the album; One Man Army’s old-school-battle-meets-new-gangsta verse on ‘Combat’, in particular, makes me wish the whole album had been a compilation of guest emcees instead. Kent has a good taste for picking emcees to rhyme with; unfortunately, he can’t hear that he’s not up to their level. The result is a very frustrating and disappointing album.