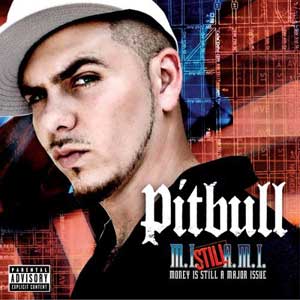 Aiming for the stocking-stuffer category this Christmas, Pitbull’s latest release is a budget-priced compilation of remixes from his debut album “M.I.A.M.I” and collaborations with other artists that have occurred in the past year. With “M.I.A.M.I.” already shipping gold, its a smart move by the Cuban to try to maximise his exposure without going through the effort of hitting the studio for a whole new album session.

Lead single, ‘Everybody Get Up’ opens the album. Here Pitbull links up with teen-R’n’B flavor of the moment Pretty Ricky over a bouncy Jim Jonsin beat which is reminiscent of his earlier hit ‘Dammit Man’ but which, ultimately, lacks the impact of that particular single. ‘Rah Rah’, and the later ‘She’s Hotter’ attempt to push a reggaeton flavor – on the former, Pitbull and Elephant Man ride an energetic guitar groove to produce an enjoyable club record; on ‘She’s Hotter’ its TOK who share time with Pit, and the end result is a track that’s half dancehall, and half Sex And The City theme tune which you’d be forgiven for marking down as an R Kelly production (its actually Chris Birtch). Elephant Man also appears on a remix of the massive Ying Yang club banger, ‘Shake’. Pitbull drops a different verse from the original, almost entirely spitting in Spanish here, but it barely matters as the beat and the hook is what will always blow this song up.

‘Culo’ appears for what it seems is the 2765487654th remix of this particular track. Again Pitbull spits much of his verbals in Spanish, though his last verse is in English and shows the type of talent he actually has. Meanwhile Lil Jon eggs him on over the familiar Coolie Dance Riddim and Ivy Queen pops up here for a pretty worthless guest appearance. Fellow fans of the Coolie Dance Riddim, Nina Sky pop up on their remix of ‘Turnin’ Me On’ where Pitbull features with a verse. Its a face paced, Beyonce-lite affair though, and Pitbull’s verse neither adds or subtracts from what is actually a fairly average song. ‘Mil Amores’ is more interesting due to the fact that it flits between reggaeton and soca flavors, as Pitbull, Master Joe & OG Black throw down, but not being a big fan of the whole genre, much of what I’m sure is the best of the track, passes me by.

The second half of the album is of a much higher standard. Rich Boy’s ‘Get To Poppin’ is as highly impressive now as it was 4 or 5 months ago when I first heard it. Brian Kidd’s beat is Timbaland-esque to the extreme, which is no bad thing, and Rich Boy and Pitbull flow effortlessly over it, interpolating ‘Top Billin’ as they do so. ‘Might Be The Police’ sees Pit and Poe Boy’s Brisco talking about life in Dade over a bass heavy, horn driven beat, while ‘Who U Rollin’ Wit’ features Pit, Picallo & Cubo rocking at around 80bpm on a Tazz track built exclusively to get the club crunk. Cubo also features later on the plodding ‘Oh No He Didn’t’, the only real misfire amid the strong tracks that appear after the halfway point.

Things wouldn’t be complete without revisiting ‘Dammit Man’ and ‘Toma’, arguably Pit’s two biggest tracks of his career so far. On the ‘Dammit Man’ remix, you get the same sick Jim Jonsin beat, and Pitbull and Lil Flip trading verses over the top; while ‘Toma’ remixed sees a cast of reggae stars lining up to rock the track with Pitbull, including Mr Vegas, Wayne Marshall, Red Rat, TOK & Kardinall Offishall.

Although several of the tracks here are firmly entrenched in filler territory, the highpoints here, plus the budget price and the inclusion of a bonus DVD featuring vids for ‘Culo’, ‘Dammit Man’ and ‘Toma’, and a host of live perfomances still pushes this into the ‘things you might want to check for’ category.

One Reply to “REVIEW: Pitbull – Money Is STILL A Major Issue”