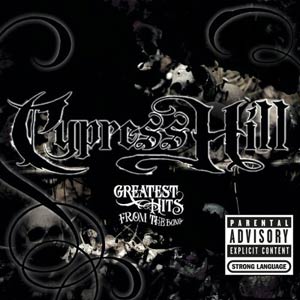 Album: Greatest Hits From The Bong

I suspect I’m not the only one who stopped checking hard for Cypress Hill after the release of their third album. After their incredible self titled debut, many got the feeling that “Black Sunday” and “Temples Of Boom” were built to take advantage of their new-found fame with the ‘alternative’ and (yes) ‘pop’ crowds… of course catchy hooks and copious Mary Jane references aren’t a Hiphop crime (ain’t that right Dre and Snoop), but it was difficult to fight the feeling that where the group’s debut was aimed squarely at the Hiphop head, “Black Sunday” and “Temples Of Boom” were trying to cover all markets, often to the point where the people who originally helped put them on seemed to be getting ignored.

Clownish videos begat Metal Hammer interviews, culminating in DJ Muggs making a complete tool of himself in HHC by dissing ALL Hiphop made outside the USA, and I quietly made my excuses and left… of course the odd beat might make me check back for them from time to time, but for the most part me and those crazy Cypress Hill kids were done. (No homo)

Fast forward to “Greatest Hits From The Bong”, Columbia’s collection of the group’s um… greatest hits, and my interest is piqued again. Here’s a chance to check out what they’ve been doing since album three, that I haven’t really checked for – all wrapped up in one… handy… cd… with… only… 12… songs… on… it… Why so short? Why are so many tracks from the first three albums missing from here? Why are there only TEN ‘greatest hits’ on here (two tracks are brand new apparently – which instantly makes a mockery of the title… how can a song be a hit if its never been released?) Surely a group with a back catalogue as swollen as Cypress Hill deserves at least a 2 cd set? Where are the remixes? Where are the collaborations? Where are the live tracks?

The actual tracks chosen to appear here certainly aren’t bad at all, but its the non-appearance of several key cuts that is bemusing. Its no surprise to see ‘How I Could Just Kill A Man’, ‘Hand On The Pump’ or ‘Latin Lingo’ here, but where are ‘Pigs’, ‘Hole In The Head’, or ‘The Phuncky Feel One’? Similarly, ‘Insane In The Brain’ and ‘Ain’t Goin’ Out Like That’ are no-brainers for inclusion, but the absence of ‘When The Shit Goes Down’, ‘A to the K’, ‘Cock The Hammer’, and ‘Hits From The Bong’ is telling. And while I understand that Columbia certainly don’t want to GIVE you the complete first and second albums here, the decision to cut out these tracks while including the horrible ‘Rock Superstar’ over ‘Rap Superstar’, and the original ‘Throw Your Set In The Air’ instead of the infinitely more popular Erick Sermon remix shows that someone needs a good slap. This group’s work is CRYING OUT for a 2 cd release!

Elsewhere ‘Dr Greenthumb’ is as annoying as ever, and ‘Latin Thugs’, while definitely addictive in its original form, is also horrifically remixed to give it a reggaeton flavor. Of the two new tracks, ‘The Only Way’ is an instant skipper due to its annoying Ambrosia sample throwing up comparisons to Eminem’s sampling of Aerosmith; while Fred Wreck’s production on ‘EZ Come EZ Go’ is initially appealing until you realise that it doesn’t change throughout the whole song. Stop the madness.

While half the album is constructed of incredible tracks, if you have the first three albums you already HAVE them. If you’re a newcomer to Cypress Hill, then shame on you. Turn in your Hiphop pass and go the back of the class. When you come back out of the corner, go cop the first couple of albums, and you should be straight – they’re never off Ebay at decent prices. This really should be avoided unless you’re one of those fools who wants to collect everything an artist ever releases.

3 Replies to “REVIEW: Cypress Hill – Greatest Hits From The Bong”