Thirteen more for that ass. Don’t worry ladies, the next little section will include your Wu-Tang faves… but apart from that we’re rapidly running out of room… who hasn’t appeared yet that you feel should make it on?

61) Eric B & Rakim €“ Don’t Sweat The Technique
LOL @ the gasps of astonishment. Yes, fuckers, this is the only EBAR album in the 100. Why? Because it’s the only EBAR ‘album’ they’ve ever made €“ “Paid In Full” is a collection of (truly great) singles padded out with some horrible Eric-B-on-the-cut (come on kick it!) type shite; “Follow The Leader” despite starting off with one of the best 1-2-3 combinations in the history of Hiphop quickly descends into complete filler; and “Let The Rhythm Hit Em” with a few exceptions is total bargain bin fodder. “DSTT” meanwhile has ‘Whats On Your Mind’ on it for starters, which shits all over ‘I Need Love’, ‘I Used To Love Her’, ‘A Bitch Iz A Bitch’ and any other Hiphop ‘love’ joint you can care to think of. On a later joint, Ra cuts off a kid’s eyelid because he’s so fucking diesel. And the title track is the first Hiphop vid from an authentic star to have an awkward looking white woman in the video hoeing it up with the rest of the chocolate eye-candy.

62) Gang Starr €“ Daily Operation
As we all know €“ when it comes to lists, compilations don’t count. And so, with “Full Clip” disqualified as a contender, “Daily Operation” becomes the single Gang Starr album to make the list. There’s a strong argument to be made for “Step In The Arena”, but personally it felt a little too light to me at times (plus it has the inferior version of ‘Just To Get A Rep’), whereas “DO” is pretty much the first true example of Primo bringing the grit and grime of NY to Hiphop heads in the style for which he’s become famous. Guru as usual, is merely adequate, sounding neither tough on the ‘thug’ tracks, or sincere on the ‘love’ tracks, but when Premier is abusing speakers and eardrums as much as he does on this album, its easy to tune Keith out. By the way – “Hard To Earn” has as many misfires as it does heaters, “The Ownerz” lacks that certain spark that lit the earlier albums, and “Moment Of Truth” actually COULD make the list depending on my mood and a certain time. Today however, all I hear is K-Ci & JoJo murdering the hook on ‘Royalty’ and thus I swiftly move to the next artist.

63) Group Home €“ Livin’ Proof
Hiphop production legend produces an album of amazing beats at the very height of his supernatural boom-bap powers. Gets in his shite mates to rap over it. The end. (‘Supastar’ and the title track are the fucking knock though.) 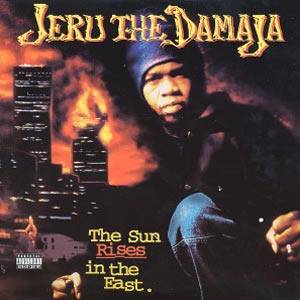 64) Jeru Tha Damaja €“ The Sun Rises In The East
Part two of our incredible story about a Hiphop production legend who produces an album of amazing beats at the very height of his supernatural boom-bap powers. Gets in his shite mate to rap over it. The end. (‘Come Clean’ and ‘D.Original’ are the fucking knock though.)

65) Nice & Smooth €“ Jewel Of The Nile
The two best wearers of silk shirts in Hiphop (sorry Kane) got a little more rugged, strapped on the Tims and the goosedown and churned out a solid album that bumps practically from start to finish, and tops “Ain’t A Damn Thing Changed” which had its fair share of homosexual tracks amongst the gems. Greg Nice still talks complete nonsense, and Smooth B sounds more the ghey here than at any point in his career, but yet, despite this, this horribly-named album somehow works. Jeep anthems, superbly simple jackings of Prince, Slick Rick guest appearances : every base is covered. They even hold it down for the white people, by bringing in Everlast to drop a verse on the rocky ‘Save The Children’ : Remember when he used to serve asses like John McEnroe?

66) Master Ace €“ Take A Look Around
One of the most underrated, overlooked albums in Hiphop history, this deservedly makes my list. Ace on the mic is at times intelligent, at times humorous, at times conscious, at times club-happy, and each and every time he, Steady Pace, or Molly Moll hook up a perfect beat to suit the mood. As this album contains the song ‘Me And The Biz’, which introduced the world to that scary ass papier mache Biz Mark doll, it gets a special Halloween snap in Trick Or Treat formation.

67) Masta Ace €“ Slaughtahouse
Along with Prince Paul and De La, I think Ace perfected the art of themed albums. On “Slaughtahouse” he goes for the throat of emcees who churn out bullshit lyrics that glorify violence but who don’t take into account the effect it has on impressionable kids. This album is even more relevant today than it was back then. And ‘Mad Wunz’ is still a mixtape staple (as well as the basis for Big Dawg Pitbull Westwood’s traditional theme tune for his Saturday show)

68) Masta Ace €“ Sittin’ On Chrome
Ace’s subsequent two albums could easily feature on a top 100 list on a different day €“ he’s easily one of the most consisted and gifted emcees to have ever picked up a mic. However his entries on MY list end with this one €“ another themed album, this time of NY raps with a distinct West Coast flavor. Its executed superbly throughout, although many people may really only be familiar with ‘Born to Roll’, the big breakout single. Other cuts like ‘The B-Side’, ‘Terror’, ‘The INC Ride’, and ‘Turn It Up’ definitely impress much more than this though, and it’s a crime that this album is another one that’s overlooked by so many people.

69) Redman €“ Whut? Thee Album
One of the strongest debuts in Hiphop history. Red came out the blocks hard, representing the Bricks to the fullest while at the same time showing the world that not only had Erick Sermon still got some funk production tricks in the bag, but that Redman himself could hold it down competently on the boards. Reggie’s sense of humor shines out from every track, harkening us back to a period when Hiphop was a lot more fun that it is now. If you ever come across anyone who dislikes this album, please kill them immediately.

70) Redman €“ Muddy Waters
Similarly, if you ever come across anyone talking up Redman’s sophomore album, “Dare Iz A Dark Side” please feel free to give them a 2-piece with a biscuit as well. This album, “Muddy Waters” is the TRUE follow up to Red’s debut. It brings the fun and the funk back into the mix – a formula that was sadly lacking from the inferior second album €“ and sees Red link up with Method Man for the first time, as well as Busta Rhymes, Keith Murray, K-Solo, and Erick Sermon at different points throughout. Beat wise, its another supreme performance on the boards again shared largely by Red himself and E-Double. There are many people who don’t have this in their collection because of the mediocrity of “DIADS” : don’t make the same mistake as those herbs. This is the last true example of Redman as a top notch emcee €“ after that he starting hanging round with the wrong crowd (I see you Meth), and got into all types of trouble (I see you ‘The Red & Meth show’) that he would never have done in his earlier days. Thankfully, Jigga’s continual stiffing him over release dates seems to have brought the hunger back to the Funkdoctor judging from recent mixtape appearances : lets hope his next (as yet untitled, and not scheduled for release) album contains more than fleeting glimpses of the Red we’ve all come to know and love. (No Brokeback.)

71) Das EFX €“ Straight Up Sewacide
While we’re on the subject on overlooked albums €“ don’t sleep on this one. In the rush to proclaim Wu-Tang kings of Staten Island in 1993, many people trampled Drayz and Scoob’s follow up to “Dead Serious” into the dirt. Their loss. Dropping much of the ‘iggity-wiggity’ flow that brought them their initial fame, Das EFX and main producer Solid Scheme, tightened both delivery and production up a few notches and brought some serious heat to the ears. The fact that too many people were burying their tongues in the collective Wu asshole at the time, meant that this amazing album still exists as a virtual sleeper for a lot of heads. ‘Underground Rappa’, ‘Baknafekk’, ‘Freak It’, and ‘Gimme Dat Microphone’ all stand head and shoulders above much of today’s Hiphop material. Ipso facto cunto.

72) Tone Loc €“ Loc’ed After Dark
Stop laughing. I love this album. So what if Loc was only huskily growling what Young MC wrote for him? Y’all don’t have problems with giving Dre, or Biz, or MC Lyte a pass when they do it : why pick on the voice of a cartoon bear? Anyways, y’all know the deal with the pop side of this shit €“ ‘Wild Thing’ and ‘Funky Cold Medina’ are the big hits that everyone knows from here. Unfortunately if that’s all you know about this album, you’re missing out on the title track where Loc swallows a bucket of gravel over the same break Ice-T utilized for ‘High Rollers’; the bar room ambience of ‘The Homies’ where Loc big ups the ones who got his back; and the smokers anthem ‘Locin’ In On The Shaw’, which takes relaxation to another level. ‘Don’t Get Close’ and ‘Cuttin’ Rhythms’ also provide two more reasons why this regularly makes it into the changer.

73) Showbiz & AG €“ Runaway Slave
I first copped this on tape, and played it so much that I snapped the damn thing. I got another tape and snapped it too. Now I’m on my third tape, alongside the cd version, and the vinyl is in that pile over in the corner. I support when artists deserve it y’see. This one goes hand in hand with the heavily-favored (and overlong) “Stunts, Blunts & Hiphop” by Diamond D. They both come out of the DITC camp, both around the same time, and both carry the same NY-basketball-court-summer-anthem/Tims-N-Hoods-in-winter double feel in much of their material. Showbiz of course is the producer/emcee extraordinaire €“ a veritable beast both on the mic and the boards who gets ‘head on the escalator’ from numerous hoes. Andre The Giant, or plain old A.G. to his parents, plays the steadfast lyrical warrior; viciously slaying foes with a pen and a pad. Trademark boom-bap era Hiphop on the highest possible level is the aim here, and both Show and A.G. do not disappoint. The fact that Lord Finesse and Big L (amongst others) feature here with terrific verses on the anthem ‘Represent’ gives you one more reason to go out and cop if you haven’t already done so.