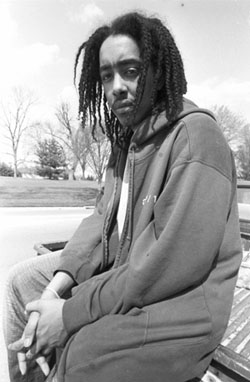 I got hooked up with emcee/producer Oddisee from Halftooth Records and their compilation release “You Don’t Know The Half” during his bus commute from Chinatown to Chinatown.

Oddisee: Aww maintaining man you know having interviews on the bus ride gives up something to do for four hours you know what I’m sayin’? [chuckle] It’s a perfect time to schedule all the interviews.

I just hope it ain’t a bus ride from hell like I had man, the dang bathroom door was broken and the toilet was messed up.

Oddisee: [laughs] Where you at?

I’m in Florida now, it was a ride I took up from North Carolina to Richmond.

Oddisee: Oh I hear that, see these joints we on right now, we ain’t even on like no greyhound, it’s like this bootleg bus that runs from Chinatown to Chinatown.

Oddisee: And it’s twenty dollars for the joint. It’s sweet though, know what I mean?

Oddisee: What’s going on with you dawg?

Just getting this stuff together here you know. Like I was telling Kenn (Starr), I just got through with the You Don’t Know the Half joint. Definitely a hot joint.

Oddisee: Good looking out, I appreciate that.

You worked the hell out of them boards for sure.

Oddisee: [laughs] Trying to do my best man.

One thing that stood out to me as far as the production side for you was how you were able to change up like when Little Brother took that cut on there and you produced for them you matched their sound, know what I mean? It’s like the sound of the track that you produced sounded like one of their tracks, know what I mean? So I thought that was kinda nice the way you did that.

Oddisee: Yea yea, I do my best. That’s how I like to work. I like to work and know the artist that I’m working with to build with them, to try to cultivate their sound versus just handing them a beat CD of what I do and having them switch up their flow for what I’m doing. So with Little Brother it was a bit easier because we’re all real cool with them we chill with them, build with them, done shows with them so I know their sound and they know mine. It was much easier to create something that fit them more so than creating a random track and letting them rhyme over it.

True, true. Now, in the bio it was giving some things on your background and everything and it said it was your father that gave you the vinyl that fueled your passion for Hip Hop.

Oddisee: Yea no doubt. It was my father that gave me my first set of vinyl. When he came to this country he became like obsessed with the soul music and stuff we had. So I grew up, especially being from Maryland, DC area, I grew up listening to a lot of Mase, you know what I’m saying, stuff like that because that’s what he was into. It’s ironic cause my mother, my mother’s American my father’s from Sudan, but my father was the one who was more so obsessed with American music more so than my mother. So I got a lot of my influences from him.

What was that first piece of vinyl that grabbed your attention?

Oddisee: The first piece of vinyl that grabbed my attention? Oh wow, I can’t remember the exact name of the album but I know it was a Mase featuring Frankie Beverly joint. Yea, just the use of synthesizers with live instrumentation simultaneously, it was something about it, I felt like to this day their some of the best that did it.

True, true. One thing that ran throughout the whole You Don’t Know the Half album was a positive vibe and was especially touched on in your joint “Yes Y’all”, which was definitely a hot joint and the chorus really set the joint off.

Oddisee: Yea I live performing that joint live. It gets the crowd open man.

You got solo projects coming up?

Oddisee: As for a solo project, what do I got going on right now? I probably won’t drop a solo album until fall or winter. But right now I’m working on Wordsworth album, I’m working with Bahamadia, I got a lot of stuff going on overseas with a couple of French artists. I’m working on a Jazz instrumental album which should be done in a matter of weeks, so all the cats that’s feeling the beats, let ’em know. It’s a Jazz instrumentation album, a friend of mine, Unknown, a fellow producer, [we’re] putting the whole joint together, like raw Hip Hop beats jazzed out with full blown Jazz instrumentation on top of it.

Would that bet the cat that’s on the You Don’t Know the Half that does the “IshLab Outro”?

Oddisee: Naw, no. IshLab, that’s a separate group. My man Unknown, he just :a producer around the way, know what I’m saying, he hasn’t had his time to shine so I’m doing my thing. So I’m producing this joint with him to get his name out, know what I mean?

Yeah I feel you. That should definitely be kinda nice.

Oddisee: Yeah for sure, it’s going to be dope man.

So what’s the half that heads don’t know that they need to know.

Oddisee: What’s the half that heads don’t know that they need to know? Wow. [chuckles] Low budget, you know, 2004 critically acclaimed Kevin Brown if all y’all copped the Jay-Z remix album he did for The Brown Album, my man Cy Young, the critically acclaimed single “Road Trip” featuring Phonte from Little Brother, that’s in stores soon. Please cop that, it’s on vinyl. Make sure they are all checking for the website, www.halftooth.com. And just look out for good music, it’s a renaissance movement as far as Hip Hop; good stuff is coming back in style. The lines between the commercial and the underground is being blurred everyday with every song that comes along know what I mean, that line is just evaporating and I’m glad to be apart of that movement.

Yeah I think it’s something that we need. Well we can leave it off on that note then.

And so we did, aside from some background chatter that you aren’t privileged to hear… real inside behind the scenes stuff that only us elite pros get to talk on… like how they are planning a tour for the spring, and how surprising it was that the Soundscan numbers showed that Kentucky bought the most units with good ol’ NY coming in behind that. That’s on some ol’ Area 51 type ish. Who would have thought Kentucky was a big Hip Hop state. Big up to the KY…mmm maybe that didn’t come out right.

Thanks to Michelle at Room Service for hooking this up.