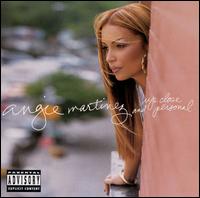 Album: Up Close And Personal

After her appearances on the ‘Ladies Night’ cut and Krs-One’s ‘Heartbeat’ joint, Angie Martinez finally steps up with her debut album “Up Close and Personal”. The Hot 97 phone answerer-turned-presenter-turned official NY Hiphop personality is out to show that she is the original “butter pecan rican”, and that while the likes of Jennifer Lopez have ascended to mega-stardom, she is gonna try to get hers in her own way.

I was pleasantly surprised with the opening track. ‘New York New York’ is produced by BK and Big Jack, two new names on the production scene. Over a hard hitting beat, Angie is joined by Prodigy and the dulcet tones of DJ Clue to spit about the way things are in the Rotten Apple.

The next track ‘Every Little Girl’ is so far away from the previous one, you might think you were listening to a different album. Angie tells the tale of how she got to where she is, over a beautiful acoustic guitar lick. Its difficult not to draw a comparison to 2pac on this cut (which is no bad thing). This is the kind of beat he would fit on perfectly and the subject matter is right up his street. This is an autobiography over beats – Angie tells us of her struggle to get a job and keep a job, how she’s had to overcome backstabbing and bitching, and the constant denial of rumours on her sexuality, her love life, and her own death.

“Overall it’s a rough business, it could stop even you,
There’s people that’s gonna say things that’s not even true,
Like the one about me not bein’ down for my women,
And I hated the lesbian rumors that went around for a minute,
How bout the one that goes, yeah she goes with him,
He bought her the car, the ice, the clothes and rims,
And I’m sure you all heard she caught one dead in the face,
It’d been different if she said what she said to my face”

Its easy to see Angie’s latin roots on ‘Coast 2 Coast’ (featuring Wyclef) and the incredibly catchy bounce track ‘Live At Jimmy’s’ which features Salaam Remi (think the Fugees’ ‘Nappy Heads’ remix) on the boards, and the support of the late Big Pun, Cuban Link, Domingo and Sunkiss on the mic. Salaam Remi also handles production on a retort of sorts to Joe and Big Pun – ‘No Playaz’. This cut features the talents of the hook-singer of the moment Lil Mo. A definite club banger.

A couple of other cuts are worth mentioning. The Neptunes sound is all over ‘Dem Thangz’, as Angie trades verses with Q-Tip over the trademark kick-kick-twang sound that the newest superproducers have made their own. Finally I have to mention the joint ‘Live From The Streets’ where Angie leaves any nice girl ideas at the studio door, to get busy with Jadakiss, Styles, Beanie Sigel, Brett and the legendary Kool G Rap (does this man EVER drop a wack verse?) NY Thug shit fo’ sho – a rugged grimy kick drum limps along accompanied by some spooky violins and sythns, as each emcee drops some ill lines.

So there you have it. For the haters – you’re gonna be surprised. Yes its NY commercial rap-by-numbers – you got the club banger, the underground cut, the track with Jay-Z (‘Mi Amor’), the Timbaland-styled staccato drum beats of ‘Go!’, where Angie tries that fast rapping style that everyone seems to want one joint of on their album, you got your Neptunes track…The only thing that’s missing is a DJ Premier joint, and don’t be surprised to see him remix one of the singles from here in the future. However, I have to say that this is a solid album – much better than I expected, and it wont look out of place sitting up on the shelf with your Flex and Clue mixtapes, and your Jay-Z and Biggie albums.