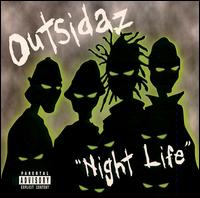 The Outz have been around for a hot minute already. Early in their careers, they were renowned as freestylers with a sort of demented sense of humour, but that one trick pony status quickly changed as more and more material was recorded by the crew.

Coming out of Newark, New Jersey, or Brick City, the Outz are comprised of a whole grip of MC’s, DJ’s and producers, including such underground notables as Pacewon and Young Zee. This EP, “Night Life”, was the first semi-major label thing they did as a unit, and was produced as a teaser of sorts for their proper debut LP as a crew.

The most defining factor of the Outsidaz is the tremendous amount of personality and hypeness that they bring to everything they touch. Whether it’s beats or lyrics, they always managed, and continue to manage to make songs that’ll get you hyped up.

The album starts off with two Ski produced tracks, ‘Don’t Look Now’ and ‘The Rah-Rah’, the latter of which made massive rounds on mixtapes a few years ago, and even managed to crack its way onto the commercial airwaves. ‘Don’t Look Now’ utilizes a frantic sounding horn sample in addition to a stutter step bassline in order to achieve its effect. Pacewon and Young Zee are the stars of the track, and the basic message is – we’re here, we’re hype, and we’re gonna blow up. A hype opener and one that’ll get you salivating for more, with lines like –

“I drink too much liquor, got a bad liver
Streets is Watching me like I’m Jigga; Staring!
Chew your crew up like they was spearmint
Kick a verse, people go crazy when they hear it
First I had no deal, now I’m living lovelier
Cause I’m on Columbia, spending all they money up
I got that hurry up, quick quick
Bust mad style in the p*ssy, like when me and my honey fuck
Pacer, Pacer, don’t make me chase ya with a razor
Blow up like Michael Jordans pager!
It ain’t a thing thing thing
First week I’m goin gold!
That’s that Ring Ring Ring
Just like De La Soul?!
No matter what the job, I hit the task faster
Educate and teach y’all like the Blastmaster
And from the vision Heaven sending me,
I can see myself on the cover of Ebony
The cover of XXL, the cover of Fresh
The cover of the Source, and the cover of Stress
Pacewon, lace buds, smoke with Gov-G
Or tour around the world with my man Young Zee”

‘The Rah-Rah’ continues the liveliness, again using a horn sample for the basic rhythm, but along with a light flute sample riding the beat. The defining factor of ‘Rah-Rah’ is the anthemic call and response style of the track though. This is basically a Pacewon solo outing, and the chorus will GUARANTEED get a crowd hype. Not only that, but the lyrics, while not mind-blowingly conscious, will manage to bring a smile to your face too.

“I’m the next B-I-G, V.I.P., pumpin “Juicy”
Made my debut with The Fugees, now I’m looney
Money hungry self-centered nigga actin moody
Got a Wild Style like the movie, pack a toolie
Spend hundreds on herb, give the singles to my cutie
Bulletproof hats for the cats that wanna shoot me
Hangin on my block with Big L, Cease and MOONEY
Huffin on a loosie, me and Jenz two deep
Hoodrat hoes be actin goofy
Sunburnt skin and white lips like a mooley
Rappers need to think if they really wanna move me!
Somethin to grow on, Pacewon, yours truly!”

‘Fuck Y’all Niggaz’ is basically a verbal sparring session between Zee and Rah. The concept of the song is that Zee is dissing all the crappy women out there, and in turn Rah busts on all the crappy men. The beat is bouncy and fast paced, and funnily enough, Rah Digga sounds more masculine that Zee. It gets a little repetitive, but it’s a fun enough song.

‘Rush Ya Clique’ features a rarity – a poor Eminem verse. It just doesn’t make sense in this track. Other than Em though, the rest of the Outz do a GREAT job over a funky and rubbery bassline, and an infectious chorus, with Young Zee dropping some of the funnier lines, albeit a bit misogynistic. Another note is that this song features the talents of Outsidaz member Slang Ton who was murdered before the release of this LP. He obviously had a ton of talent, so it’s a little depressing to hear him spit on this.

‘Money, Money, Money’ unfortunately doesn’t allow Az-Izz to go 3 for 3 in the beats department. He tries with a nice sounding middle eastern flute, but the buzziness of the bassline doesn’t fit with it, and more importantly, the lyrics fall flat, with the basic derivative comments on money and it’s evils. The first downer on the EP.

Pacewon tries his producing hand on ‘It’s Going Down’, with mixed results. The bassline he’s chosen is actually nice, as are the guitar strums in the background. My issue is with Pace insisting on his off-key singing for the chorus. The lyrics are pretty much on point, spouting the usual bragging ish with the usual Outz twist, and Pace pulling it off the best –

“We write the songs like Biz that got everybody jockin
With Rhymes like Busta we keep the party rockin
OutWorld music tight like your mommies stockings
Our services cost more than Johnny Cockran
I got my hand on my gauge, man on a rage
Wild, push ya man off the stage, he land on his face
Y’all wanna battle with Pace, fan you and say
Might pull a gat from the waist, blast you with eight
Mad slugs, you’ll be bleedin from the ass up
Mad blood, enough to fill up any bath tub
If you got street smarts you betta use ’em
I take out a couple like a two-some
Two non-descript kids talkin out loud on how they flip bricks
Its like we buyin a truck that only fit six
Unheard of, both hands on my burna’
Flesh wound niggas, y’all don’t really want murda”

The final song on the EP, ‘Night Life’, switches up production again, this time with Mr. Jim Jonsin doing the duties. This REALLY sounds like a Swizz Beats rip if you ask me. There’s a heavy bassline, and some ominous horns in the background, and little else. The problem isn’t that though – it’s the rhymes – they sound lacksadaisacal, and don’t fit the overall mood of the song. A pity.

So 7 songs, 5 dope ones, 2 not so dope ones. For the price of an EP, you can’t go wrong here, especially with the neo-classicness of the first 2 joints. Highly recommended. And don’t forget to pick up their LP too.