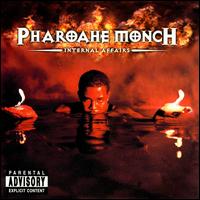 Pharoahe Monch, as we all know, is one of the finest lyricists to grace the ears of contemporay hip-hop listeners. As one half of Organized Konfusion, we knew all about PM’s ability as a lyricist in the duo. But could he create a solo album that lived up to his huge potential? Well, the release of “Internal Affairs” proves that yes, he can. It’s also a good look back into the days when Rawkus could release a decent album (as anyone who has experienced the horror that is “Soundbombing III” will know). But I’m getting distracted…

“Internal Affairs” is, first and foremost, a showcase for the utterly stupendous lyrical ability of Pharoahe Monch. He can pull all kinds of proverbial rabbits out of hats and ignite all kind of tricks – alliteration, assonace, meter, multi-syllable rhymes, internal rhymes – you name it, he’s got it. Where do I start? ‘Right Here’ is as good as any other place. Over a scorching keyboard burst Pharoahe goes absolutely crazy with his lyrics :.

“In any extremity y’all get infinity vertical
Every line to word of mine will be verbally placed to murder you
The master, flippin convertible flows irreversible
Unobtainable to the brain it’s unexplainable what the verse’ll do
Pharaoh’s the sperm your mind’s the eggs I’m burstin through
Y’all heard of me, I pack macs and crack vertebraes
Leave niggas with third degree burns and back surgery
Mics guns knives, pick declare which object, flip
Have niggas runnin like the Blair Witch Project”.

The key to these lyrics is to imagine these amazing plays on words and literary devices PELTED out at 100mph. His breath control is literally perfect.

You get this kind of breathtaking lyricism throughout “Internal Affairs”. Scaling pianos and jazzy horn blasts power the dark-ish ‘Behind Closed Doors’, as PM freestyles with intent and lets listeners know just how talented he actually is. ‘Rape’ is a trip into the darker realms of Monch’s psyche, because the entire song uses sexual assault as an extended metaphor for his skills, over a dark, moody beat. Directly contrasting this is the light, airy feel of ‘Queens’, which is obviously an ode to the New York boro.

And while PM is a hardcore, underground emcee, he proves he can churn out the odd hit with ‘Simon Says’. This is a dirty, thumping club anthem with a rousing chorus and aggressive freestyle lyrics. Nothing close to selling out, and a fine club anthem that was one of the biggest singles of 1999. The musical quality of this song is a good representation of the album as a whole – it’s raw and has an “underground” atmosphere, yet its damm fine and listenable. Plus, Pharoahe produced the track, which is further indication of his talents (NB – a great deal of the album is self-produced).

But while PM shows that he is indeed a raw, uncut lyricist for most of the album, “Internal Affairs” also contains several tracks with intelligent, thoughtful lyrical content. My personal favourite is ‘The Truth’, featuring Talib Kweli and Common. A sweeping orchestral background supports the intelligent lyrics about modern life. Articulated thoughts come from all, but Kweli shows the talent he has the best…

“I ran wit what God planted in my heart and I understand it
To be the bring the light to the dark, breathe some life in this art
This must be the truth (why?) cuz we keep marchin on (true)
The truth lay the foundation of what we rockin on (true)
You can’t see it if you blind but we will always prevail (true)
Life is like the open sea, the truth is the wind in our sail
And in the end, our names is on the lips of dying men”

Rest assured that many of the tracks on the album are precisely like this.

We’ve had the individualistic lyrical wizardry. We’ve had the intellectual prowess. Pharoahe then teams up with some classy guests in some great collaborations. ‘Hell’ finds PM teaming up with fellow Horseman Canibus, as producer Lee Stone creates a fiery track that sounds like its come right out of satan’s layer, and PM and Canibus both drop killer raps with some storming lyrics. This quote from ‘Bis is a classic…

“The whole room is full of Angels
All in your ear trying to tell you which God you should pray to
You pray to Jesus, but he dont wanna save you
Cause you unfaithful, so he sends you to Azazel!”

Not content with this, microphone dismantlers M.O.P drop by on the brutal ‘No Mercy’. Over a strangely Egyptian sounding beat, all three emcees simply rip up the mic with the typical “do or die” mentality that the First Fam MOP! are famous for.

‘God Send’ is a nice Organised Konfusion track, and ‘The Next Shit’ (featuring Busta Rhymes) is a good solid cut. Unfortunately, ‘The A**’ is a wack, horrible song that sounds stupidly misplaced on a Pharoahe Monch album. And err : that’s it. This track is about all that’s wrong with “Internal Affairs”.

Make no mistake; Pharoahe Monch is a supremely talented man. His talent is reflected accordingly during “Internal Affairs”. Strong underground production and ASTOUNDINGLY varied showcase lyrics make this a sure-fire hip-hop winner throughout. One of the albums of 1999, and a real triumph for the underground.