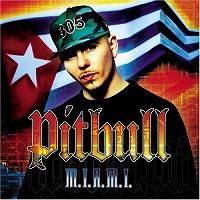 Love him or hate him, you’d be hard pressed to argue that Lil Jon is not a Hiphop success story. Whether its for material released with his own Eastside Boyz, or as a straight up producer for other artists, Jon’s hit ratio far outweighs that of his failures. The main reason for this is of course his instantly recognisable production signature of claps, synths, and crunk – but an often overlooked secondary reason is that Jon seems incredibly picky about the artists he works with. Each artist seems to already have a certain something that, when combined with his board work, takes things to a whole new level – Usher, Ying Yang, Fat Joe and the rest of the heavy hitters already boasted a fairly successful back catalogue of work and success before Jon’s influence blew them up another notch. If seems that if Lil Jon deems you worthy of a track or two, then you may well be about to have a career moving in an upwards direction.

And so we come to one of Jon’s latest prodigies : Pitbull, an emcee representing the 305 area code of Miami first turned some heads early in 2004 with the underground clubshaker ‘That’s Nasty’ where he and fellow Latino destroyer Fat Joe traded verses over some nifty DJ Nasty and LBM boardwork as Jon ranted and raved in the background in trademark ‘demented smurf’ fashion. Backing this up was ‘Dammit Man’, a Jim Jonsin track combining ominous crunk synths and horns that bit heavily on Lil Jon’s production style while demonstrating how comfortable Pitbull and his buddy Piccallo were over this type of beat.

The true ‘blow-up’ single though was a total departure from what had come before. With Jon on the boards, the Coolie riddim was jacked to perfection for the ass-shaking anthem ‘Culo’, a 120 bpm romp featuring reggae-influenced Spanglish rap from Pitbull, all the while egged on by the King of Crunk. An additional version which meshed the original with Mr Vegas’ identical sounding ‘Pull Up’ only helped to push the track, and thus Pitbull, over that little bit more.

On the back of this success comes Pitbull’s debut release “M.I.A.M.I.” – a long player with which the unassuming Floridian hopes to put both himself and his home city firmly back in the spotlight after several years where the rest of the Hiphop world sniggered at the M.I.A for giving us the 2 Live Crew and little else.

Opening with the ‘305 Anthem’ isn’t a bad move at all. Its standard Lil Jon fare – a slow crunk jam with a rowdy chorus, which definitely moves the speakers and the head, but doesn’t quite capture the imagination like other more classic Jon fare. However it sets the scene for what is to come, as Pitbull sets out his mission to rep Miami and its Latino heads to the fullest –

Following this and ‘Culo’ comes the Diaz Brothers-produced, ‘She’s Freaky’, which unfortunately brings things back into embarrassing 2 Live Crew territory, with a horrible Miami bass-tinged beat, and some schoolboy rhymes about ladies getting drunk and getting freaky. Luckily, following this, Lil Jon steps in to save the day, somehow taking the exact same old school Miami blueprint, and producing a series of cuts that will definitely appeal to Southern dancefloors. ‘Shake It Up’ and ‘I Wonder’ feature breathy female vocals from new TVT signing Oobie (another Lil Jon talent spot), with the former track dropping her vocals over a pulsating synth/clap combo, while the latter slows things down, building a funky slow jam around an interpolated Lisa Lisa hook. Unfortunately both of these cuts could easily remain listenable without Pitbull’s vocals, as they seem to be more of a vehicle to display the talents of Oobie and little else. Despite featuring on HIS album, Pitbull is relegated to bit-player on both tracks. Sandwiched between these is ‘Toma’ – think Lil Jon putting his own touch on Tony Touch’s ‘Dimelo’ and you’ll get a decent description of how this turns out. ‘Get On The Floor’ rounds off Lil Jon’s work on this album, and this time Oobie’s role is less dominating, allowing Pitbull to churn out some fairly standard club lyrics over some more squelchy synths.

From here, Pitbull hands over the production reins to an assortment of other producers with varying results. ‘Dirty’ slows the tempo way down with a piano-driven track from Demi supporting Pit and UGK’s Bun B’s boasts of unclean antics. Bun’s experience and longevity in the game are obvious from his confident laidback delivery which stands at odds from Pitbull’s often TOO eager rants. Separating ‘Dammit Man’ and ‘That’s Nasty’, ‘We Don’t Care About You’ features the Diaz Brothers biting down hard on Lil Jon’s steelo – it seems that even when he’s not involved with a track, he’s STILL somehow involved with the track. The fact that Pitbull drops a shoutout to him in his opening verse adds to the suspicions that he was somehow kicking around the studio during the sessions for this track.

‘Back Up’ and the later ‘Hustler’s Withdrawal’ though are welcome returns to form for the Diaz Brethren after their earlier failings. ‘Back Up’ evokes memories of “Chronic 2001”-era Dr Dre, with its hard snares and simple piano keys beating a tattoo on the brain. Its really the first non-bass and non-crunk track of the album, and its refreshing to hear Pitbull dropping verses over a ‘normal’ beat, even though the subject matter still revolves around asses shaking, and drunken club escapades. ‘Hustler’s Withdrawal’ meanwhile is a much more introspective track, where Pitbull breaks down the story of a drug dealer and smalltime hustler, and his struggles to leave his negative ways behind. The DJ Khaled-led ‘Melting Pot’ also leaves club-hopping behind, as Pit and fellow Miami resident Trick Daddy trade verses over morose piano rolls. The forgettable ‘Hurry Up And Wait’ and the Mr Vegas version of ‘Culo’ round out the album with a half hearted attempted to bring things back to the club, but both seem strangely out of place after the series of non-club tracks that preceded.

This isn’t a bad debut at all. The only problem is that with Lil Jon overseeing the majority of tracks here, and being generally recognised as Pitbull’s mentor, many people (who don’t feel Jon’s style at all) will more that likely pass over Pitbull in terms of *yawn* ‘that real shit.’ Oh well, let them enjoy their Jadakiss and Mobb Deep borefests while the more open-minded among us welcome a new talent to our ears. On this evidence, Pitbull’s star is set to shine for a long while to come.