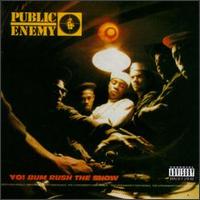 Album: Yo! Bumrush The Show

At the time of this review, this record is 14 years old. And it still shits on a lot of the stuff out today. I remember picking this up the week it dropped, and marvelling at how fresh it sounded compared to a lot of the Hiphop music it was competing with in 1987. The situation still hasn’t changed. Yo! is one of those albums I find myself coming back to every couple of months – the energy of the music, the hunger of Chuck D, the way Flavor compliments him… everything just falls into line to make this a strong release.

‘You’re Gonna Get Yours’ is a certifiable classic – the Dennis Coffey guitar lick, the simple loop, the scratch of car tyres squealing. The subject matter? Chuck D bragging on how dope his car is, may sound like a tired (excuse the pun) subject nowadays in this scenario of Beamers and Bentleys, but this is still one of the earliest and dopest Hiphop anthems ever to make it onto wax.

In contrast, ‘Sophisticated Bitch’ hasn’t aged well. To be honest I’ve never really liked this track as much as the others – I’ve never been a fan of rap meets rock tracks. Around the time this was released, it seemed that every group had to have their ‘Walk This Way’-influenced track, and this joint seems to be the candidate to fill the category for PE on here.

As the guitars fade out, the twinkly-twinkly intro of ‘Miuzi Weighs A Ton’ fades in. Then as Flavor urges Chuck to “run a power move on ’em”, the hard ass beat drops, and Chuck spits pure flames. A lot of people don’t give Chuck D credit for his mic skills, perhaps because PE were always seen as political, and Chuck never really dropped lines about the amount of emcees he was taking out. Nonetheless, his flow on this is second to none. Add to this the memorable chorus, and we have another winner.

Chuck again flexes his skills on ‘Timebomb’. Three solid minutes of rhymes – no chorus – no pauses. Just Chuck D and a loop from the Meters’ ‘Just Kissed My Baby’. Another track that easily stands the test of time. The only thing that dates this is some of the lyrical references – “South African government wrecker”, and references to Margaret Thatcher, former UK Prime Minister – PE are still on the scene long after the people they have referred to are gone.

‘Too Much Posse’ is Flavor’s solo cut – a special serving of crazy mixed up lyrics that became a feature of every PE album. People may credit “It Takes A Nation’s” ‘Cold Lampin’ joint as the one that really thrust Flav into the spotlight, but we can see here that he was already buggin’!

‘RightStarter (Message To A Black Man)’ shows how PE differed from other groups of the time, as among the bragging and boasting, Chuck was “saying things that they say I’m not supposed to.” With hindsight its easy to see how not only this track with its politicised title, but this entire album, was setting the scene for the revolutionary charged lyrics to come in the “Nation” album.

‘M.P.E.’ with its slow slow beat and sirens echoing in and out, is a departure from the previous cuts. This is also the first track where Chuck and Flav trade verses. This one is actually kinda average.

Not so the title track. The energy of ‘Yo! Bumrush The Show’ still sends shivers down the spine 14 years later. This is just dope. You gotta check it. Nuff said.

The next couple of tracks, are two that I’ve never really felt. ‘Raise The Roof’ and ‘Megablast’ are both slow-paced joints. They both sound kinda dated now too. Some nice scratches on ‘Raise The Roof’ though. ‘Megablast’ is another indicator of greater things to come, as PE touch on the still-present drug problem in the inner cities. The “Oh Please Oh Please Oh Please” chorus always kinda grated on my nerves.

The album closes with instrumentals of a couple of the earlier cuts – ‘Timebomb’ and ‘M.P.E.’ For some reason its called ‘Terminator X Speaks With His Hands’ – a strange choice since there’s no cutting or scratching of any sort on here. The title however does create the mystique around the ever-silent Terminator which PE played to great effect on later albums.

A classic? Hmm… although it does have its high points, it has to be said that the album hasn’t aged as well as “Nation”. This is not to take away from the fact that some of the songs themselves ARE bonafide Hiphop gems. However I feel that the reason myself, and a lot of older heads keep returning to the old albums like this is pure nostalgia – wishing for how it used to be. Unfortunately we can’t go back – Hiphop is big business nowadays. But I feel that this is an important album for newer fans to the genre to pick up. This enables people to see where the likes of Common, Kweli, and Dead Prez are coming from. And that ain’t a bad thing.