As a child of the 80 €™s, my friends and I often glued ourselves to the floor when martial arts movies were on T.V. Nothing was more invigorating than seeing a guy overcome adversity by extending a warm can of whoop ass to his opponent. Besides the clichÃ© ending where the protagonist triumphs; my favorite parts were those montage training scenes where the main character goes from zero to hero in ten minutes. Whether it was learning to fight blind (Bloodsport), catching flies with chopsticks (The Karate Kid), or being trained by Bruce Lee €™s spirit (No Retreat, No Surrender) victory only materialized after our champion demonstrated the five foundational disciplines of success: hard work, self motivation, commitment, critical thinking, and structure.

Despite the heavy use of unbelievable situations (eg. every Jackie Chan movie) to further the story €™s narrative along; the realistic benefits received from adhering to the five foundational disciplines remain unscathed. Proof of this comes every Tuesday night in the form of hungry rappers who transform into the ghost rider to spit fire like Mario before their master of motivation, Mental Supreme (not to be confused with Omega Supreme from Transformers), at the Pyramid Club, located in New York City €™s famous East Village. For the past five years Mental Supreme has turned Tuesday nights at the Pyramid Club into what he calls €œTraining Camp; € a safe haven for underground artists to sharpen their stage presence while simultaneously learning how to survive in today €™s music industry.

When at Training Camp, performers receive preacher-like sermons of encouragement from Mental Supreme that often reiterate the aforementioned disciplines of success; and the culmination of everybody €™s hard work came to the forefront this past Tuesday as Mental Supreme recruited the renowned mixtape prodigy, DJ Envy, to host a competition he put together at the Pyramid Club, which also included a slew of high level industry professionals scheduled to judge the event. The grand prize of this prestigious competition was $5,000, and only those handpicked by Mental Supreme were allowed to participate. In addition to a generous cash prize, artists were presented with an opportunity to perform before a panel of judges who can potentially push their career into fifth gear. These incentives were enough to command Training Camp €™s finest members, accompanied by their respective €œarmy € of supporters, to the Pyramid Club on a cold evening in late January.

The judges were attorney Kevon Glickman (Rick Ross, Trina, etc.), Amanda €œPrecise € McIntyre-Chavis (Virgin/EMI Music Group/CEO of Musaic Management Group), Steve €œRaze € Julien (President of Allhiphop.com), and Jason Mazur (A&R for TVT). Besides these illustrious judges, other top notch industry representatives were in the crowd seeking tomorrow €™s next hit maker. With stakes this high, and a club packed wall-to-wall with hip hop advocates, the pressure was on for all 27 performers to flex their talent muscles on stage.

Artists with names like Quest The Wordsmith, Flawless, and Crucial started the showcase off with raps tighter than Pamela Lee €™s dresses. Their unique syllabic combinations intertwined with a side order of intensity not only provided the judges with an example of the high caliber talent on Training Camp €™s roster, but it also set the tone for the entire evening. One of the many things that made this particular competition so unique was the variety of talent that graced the stage. Flawless (representing Jamaica, Queens) brought along a live drummer to accentuate his roll over melodic wordplay, and as the drummer poured out faster beats, Flawless, seemingly unfazed, sped up his rhythm to match. Supernova, a three piece €œband € with a saxophone player and drummer, brought a smooth, yet energetic, sound to the stage. Their sound could be likened to that of Guru €™s Jazzmatazz series or Q-Tip €™s alter-ego, Kamal The Abstract.

The real surprise, though, came when the Japanese whiz-kid named Coo (pronounced ko-u) hit the stage to project lighting quick lyrics at the crowd in tommy-gun fashion. Coo €™s hands flailed at the audience with vigor as his word velocity increased to the point where it sounded as if he was rapping at 120 beats per minute. €œI moved to New York from Tokyo to be a rapper, € explained Coo after his performance. Oh, by the way, in case I forget to mention, Coo raps completely in Japanese, which appeared to stump everyone in attendance. €œIt doesn €™t matter whether people can understand him, € explained Mental Supreme. €œEveryone can feel his energy and that €™s most important. €

Other performers such as Voodoo Soul (a full band), Nemesis, Dirk Diggler of Hard Body Records, and Paternal may have kept the crowds interested, but one artist in particular brought the ruckus with a ferocious stage presence matched only by his uncanny gift of gab. This artist goes by the name of NY Oil, and when his sound blasted through the Pyramid Club €™s speakers, vibrations of seismic proportions kept all the heads in attendance ringing. The sheer energy of NY Oil €™s performance could have powered an electric car for at least 100 miles. Not only is NY Oil a good lyricist who embodies the true essence of hip hop behind his blade runner-esqe sunglasses, but apparently he is also good for the environment; which is why the esteemed panel of judges named him winner and awarded NY Oil the $5,000 grand prize. €œMy team and I came with the sincere intention of making a positive impression, € NY Oil stated after his win. €œThat we came away with first place affirmed our true mission. € Watching NY Oil hit the audience with his sonic boom was truly a cathartic experience for this journalist.

The evening proved to a positive one for Mental Supreme and the entire Training Camp crew. Similar to a martial arts master, Mental Supreme trains his loyal disciples by consistently echoing the five foundational disciplines of success accompanied by his interpretation of them: hard work, the ability to overcome any and all obstacles when intelligence & the physical body work as one; self motivation, being solely responsible for one €™s own success or failure; commitment, actively involved with everything that pertains to you; critical thinking, the ability to see your future, based on intelligent decision making; and structure, to be organized. Mental Supreme €™s longevity as Training Camp €™s parental influence is a true testament to the quality of his business ethics, and people like Coo, NY Oil, and all the other 27 artists who took to the stage were given a chance to shine because Mental Supreme is serious about the five laws he cultivates. Kind of makes me wonder how many martial arts movies he watched growing up. 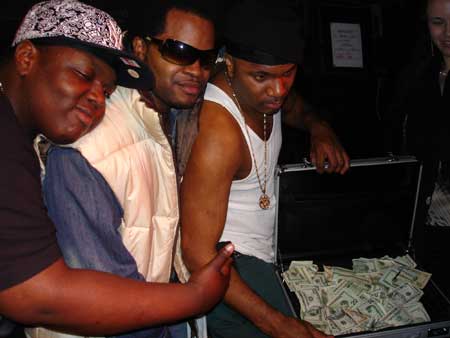